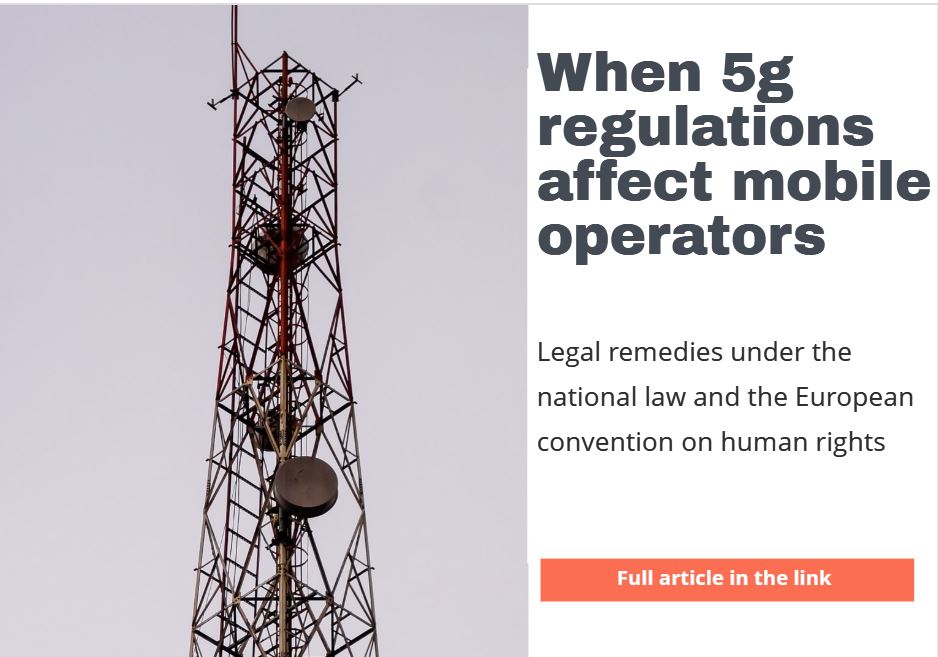 However, it is said1 that the implementation of 5G technology comes with its own risks. Currently, the European Union Member States are analyzing the measures to be adopted with a view to mitigating such risks. One important risk is closely related to ensuring the protection of national security, and in this respect certain strategic measures are envisaged2 in accordance with the 5G EU Toolbox3.

Undoubtedly, States have a legitimate and sovereign interest to issue enactments intended to protect the national security from adverse foreign actions. However, measures taken in this respect should not be at odds with the rule of law (including without being limited to the observance of national constitutions and of the EU legislation), human rights and freedoms and obligations under international treaties and conventions.

Electronic communication providers and equipment suppliers have agreements in place that cover the equipment already purchased, ordered or contracted (e.g., based on a promise to purchase) for the purposes of the 4G network (the “Existing Equipment”).

It is also envisaged that such equipment will be used in the deployment of 5G networks. In case electronic communication providers were prohibited to purchase equipment from certain suppliers for 5G network purposes, they may no longer be able to use the Existing Equipment to that effect.

In case the relevant prohibition infringed national, European or international law (and there are multiple sources warning against such potential infringement as a result of the implementation of the so-called “strategic measures”4), claims for compensation from mobile operators and equipment suppliers might potentially ensue.

This article provides a preliminary overview of some of the potential types of compensation that might be sought in such a case pursuant to Romanian law and the European Convention on Human Rights5 (“ECHR”) and related practice of the European Court of Human Rights (“ECHR Court”).

2. Types of compensation under Romanian law

In case the restrictions that would be adopted by Romania would infringe national, European or international law, mobile operators could well be entitled to seek compensation by submitting tortious liability claims against Romania (“Tortious Claim”).

Such compensation may for example refer to the following: (i) the amounts paid by mobile operators for already purchased equipment they could no longer use, (ii) the price difference between the equipment to be purchased from a new supplier and the one that could have been provided by the initial supplier, (iii) any additional amounts that would be incurred as compared to a scenario where the initial equipment could be used or purchased (e.g. higher maintenance costs, higher personnel training fees, etc.) and (iv) loss of business occurred, for example, as a result of higher prices to customers due to higher costs.

Indirect expropriation is another potential cause of action based on which mobile operators could potentially seek compensation under Romanian law for the value of the business lost or the significant decrease of the business value as a result of the impossibility to use already purchased 4G equipment.

As it has transpired in the media6, it can be reasonably assumed that such restriction would trigger tremendous additional costs and delays for deploying 5G networks, which could in turn lead to mobile operators being forced to exit the market or to lose a substantial share thereof.

This could be seen as a downright expropriation of the mobile operators’ business, as a result of legislative measures.

However, according to Article 44 paragraph 3 of the Romanian Constitution “Noone can be expropriated unless for a public utility reason, declared as such by law, subject to equitable and prior compensation”. The Romanian Constitution makes no distinction regarding the type or object of the expropriation. And although at present there are no laws regulating in detail the procedures for claiming compensation in such cases (unlike the cases where the expropriation concerns immovable assets), the ECHR Court practice makes it clear that indirect expropriation (i.e., loss of an asset or business or significant decrease of the value thereof due to State measures) requires compensation just like direct expropriation (when the State takes over the relevant asset or business).

As ECHR provisions prevail over the national legislation and even over the provisions of the Romanian Constitution, one could argue that compensation for indirect expropriation should be awarded in Romania also where, for instance, the value of business was substantially diminished or the authorization to carry out a certain economic activity has been withdrawn. Compensation for indirect expropriation can be thus sought where the business loss was so drastic that it can be assimilated with an actual seizure thereof7.

Conversely, it can be argued that businesses are to act on the market only in accordance with and within the limits of the applicable legislation, there being Romania’s sovereign right to issue legislation (so that any losses incurred due to legislation being adopted would be merely seen as a business risk). However, international law provides certain limitations and compensation mechanisms arising from a State’s sovereign right to enact legislation, to the extent that the latter infringes certain fundamental principles.

3. Claims under the ECHR

It is well established that the ECHR Court awards compensation for damages resulting from violations of the ECHR. This happens when the claimant fails in its attempts before the national courts.

Hence, should mobile operators seek compensation before Romanian courts due for instance to indirect expropriation or other infringements of the ECHR (such as discrimination, e.g. as compared to mobile operators having purchased 4G equipment from other suppliers than those subsequently restricted, or the right to a fair trial, e.g. when claimant would be unduly prevented from having access to certain classified information in order to properly state its case) and these would reject mobile operators’ claims, legal action before the ECHR Court would not be excluded.

The importance of ensuring the security of critical infrastructures is paramount. However, under the rule of law, this objective may only be achieved with lawful means. Should restrictive measures be adopted without observing the limitations and safeguards stemming from national and European legislation or the international law, mobile operators (as well as other parties that may incur prejudices) may potentially rely on various causes of action to seek compensation from Romania.

In order to mitigate risks of lengthy and costly litigations and/or significant delays in the implementation of 5G networks in Romania and/or prohibitive prices of 5G services that would eventually be borne respectively by taxpayers and consumers, Romania should carefully assess any restrictive measure it would seek to enforce to this effect from a legal perspective. Seen the dangers raised by the strategic measures referred to in the EU5G Toolbox if implemented in an improper manner, properly balanced and thoroughly thought out technical measures may eventually prove as a safer alternative.

This article contains general information and should not be considered as legal advice.

1 More information can be found here https://www.eubusiness.com/topics/internet/5g-security, here https://www.euractiv.com/section/cybersecurity/news/political-need-for-5g-cybersecurity-certification-enisa-head-says/ and here https://www.enisa.europa.eu/news/enisa-news/enisa-draws-threat-landscape-of-5g-networks
2 Such as, amongst others, (i) assessing the risk profile of suppliers and applying restrictions for suppliers considered to be high risk – including necessary exclusions to effectively mitigate risks – for key assets (so-called “vendor screening”) and (ii) ensuring that each electronic communication provider that will deploy 5G networks has an appropriate multi-vendor strategy that promotes the existence of more suppliers in order to avoid or limit any major dependency of one supplier (or of similar high-risk suppliers)
3 Cybersecurity of 5G networks EU Toolbox of risk mitigating measures (“5G EU Toolbox”) was created based on the EU coordinated risk assessment of 5Gnetworks security and lays out a range of security measures aimed at mitigating risks effectively and ensure secure 5G networks are deployed across Europe. The EU 5G Toolbox presents detailed mitigation plans for each of the identified risks and recommends a set of key strategic and technical measures, which should be taken by all Member States and/or by the Commission. It also provides guidance in the selection and prioritisation of measures that should be part of national and EU risk mitigation plans. The ultimate goal is to create a robust and objective framework of security measures, which will ensure an adequate level of cybersecurity of 5G networks across the EU, through coordinated approaches among Member States. It intends to present a risk-based approach that should be solely based on security grounds. Such approach is in full respect of the openness of the EU internal Market as long as the EU security requirements are respected.
4 See for instance, with respect to potential infringements of international obligations, EU legislation and current telecommunications framework Ioannis Glinavos, „Huawei and ISDS: 5G Infrastructureand Investment Claims”, Kluwer Arbitration Blog, June 11 2020, http://arbitrationblog.kluwerarbitration.com/2020/06/11/huawei-and-isds-5g-infrastructure-and-investment-claims/, Andrew D. Lipman, Partner, Washington, DC, Christina Renner Partner, Brussels, Morgan Lewis „Securing 5G Networks in the EU: High-Risk Vendors or High-Risk Legislation?”, https://www.jdsupra.com/legalnews/securing-5g-networks-in-the-eu-high-91517/, Ion Dragne, Alexandru Dragne, Dragne & Associates, „Germany and Austria: Forerunners of 5G Security Measures? https://www.dragne.ro/germany-and-austria-forerunners-of-5g-security-measures/ Legal challenges in implementing the 5G EU toolbox and potential damaging effects on electronic communication providers and consumers, Alina Popescu, Cristina Crețu, Maravela, Popescu & Asociații, “Legal challenges inimplementing the 5G EU toolbox and potential damaging effects on electronic communication providers and consumers” https://www.lexology.com/library/detail.aspx?g=f87c09e8-d1c2-4930-8217-9141ee3b330f.
5 The European Convention on Human Rights (formally the Convention for the Protection of Human Rights and Fundamental Freedoms) drafted in 1950 by the Council of Europe and signed on November 4, 1950, in Rome. The convention entered into force on 3 September 1953. Romania is a signatory of the Convention.
6 More information is available here https://uk.finance.yahoo.com/news/deutsche-telekom-describes-potential-huawei-ban-as-armageddon-scenario-101041104.html and here https://www.handelsblatt.com/technik/it-internet/ausschluss-von-netzausruester-armageddon-szenario-telekom-spielt-huawei-bann-durch/25918402.html (in German)
7 Case no. 3991/03 of Bulves AD against the Republic of Bulgaria, Case no. 18928/91 of Fredin against Sweden, Case no. 51728/99 of Rosenzweig and Bonded Warehouses LTD. against Republic of Poland.
8 In establishing the amount of the compensation, the principle is that the claimant should be placed, as far as possible, in the position in which they would have been had the ECHR violation found not taken place. Both the loss actually suffered and the loss of opportunities to gain, to be expected in the future are to be part of the compensation
9 The ECHR Court has previously upheld the protection of the rights to reputation of the companies as moral persons. See for instance Case Tønsbergs Blad AS and Haukom v. Norway.